Over the years I’ve built a reputation as a “niche” problem solver that is able to bring slightly weirder projects together whether in house or using third-party support.
Most of the projects are under nondisclosure agreements but I will add projects here as they get announced/clear NDAs.

Working on behalf of a well known Australian technical supplier (Mandylights) for the second year in a row I delivered a control package that allowed people to interact and control a sea of LED pixels laid out in Alice Springs. Using an enhanced version of the motion capture technology used for the 2017 large representations of hands were mapped onto the LED pixels, acting as an LED screen surface. People could also change the colour of the hands using large drum pads and trigger a rainbow chase effect but closing their hands. 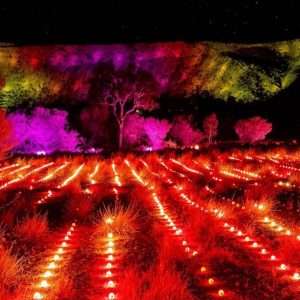 Working on behalf of a well known Australian technical supplier (Mandylights) I delivered a turnkey hardware and software package that allowed a full rig of lights at an installation to be controlled by nothing but your arms. Splitting the rig in half allowed the user to control half of the rig with their left and right hand independently.

Taking an existing code project that allows extracting BPM and Metadata from a Pioneer ProDJ link system we created the bridge that allows it to talk to grandMA2. Fantastic for clubs and DJ acts.

Using existing StreamDeck hardware LX Hues built a small backend application and keyset to turn the humble device that works on keystrokes into something that bridges with grandMA2 without needing keystrokes.